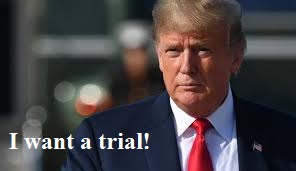 In a lengthy interview with Fox & Friends Friday morning, the first since impeachment inquiry hearings appear to have wrapped up, President Donald Trump proclaimed "I want a trial," in the matter of Trump's alleged plot to seek domestic political help from a foreign entity.

In a question designed to praise Republican Rep. Elise Stefanik, Trump quickly turned to the overall ordeal. "The bottom line is, all of those witnesses, they're all shifty Schiff's," he noted, adding "don't forget there was no due process. You can't have lawyers. We couldn't have any witnesses."

He then said "we want to call the whistleblower. But you know who I want as the first witness> Because frankly, I want a trial. You know, I think–"

Trump replied "Oh, I would! Look, number one, they should never, ever impeach."