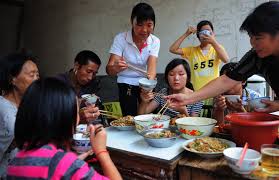 This is especially true in a country like China where the controlling party assumes the role of plotting society's course "for the greater good." I'm very concerned that governments across the world will up their game when it comes to shaping public opinion. Across the world, all the new technology available is rapidly tightening the noose around the neck of individual thought.

Reducing political descent was a core principle of the cultural revolution led by Mao Tse-tung. The Red Guards formed by his youthful followers conducted a mass purge of the "undesirables." They then went on to send the young intellectuals living in the cities into the countryside to be "re-educated" through hard manual labor. This is an example of how propaganda can turn a population to a single focus and direction which causes its members can march in lockstep. With this in mind, it has only been in the last couple of  years that the narrative of China being a threat to America has been bantered about. Before that America was busy patting itself on its back for bringing a backward China into the modern world.