> Cell division recreated outside of a cell for the first time - pirateswithoutborders.com 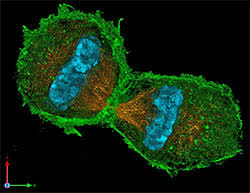 From the time we're conceived as just a single cell, to our wounds healing themselves in adulthood, cell division is a key part of how living organisms grow and survive. While we understand how this works on the broad scale, the nuances are still somewhat lost on us.

So the researchers on the new study set out to investigate the process further. To do so, they removed the "ingredients" from a cell and reconstructed them outside. But what they didn't expect was that this makeshift cell would undergo division like a normal cell.

First the team separated out actin, a protein that's key to the cellular division process. The actin proteins, which are long and rod-shaped, tended to clump together in parallel lines, forming a kind of almond-shaped droplet.

The real magic happened when the researchers added myosin, a motor protein that plays a part in muscle contraction. Surprisingly, the myosin moved towards the center of the actin droplets, then pinched them off from the middle, forming two separate "cells."