> Polar bear fur-inspired insulation is even better than the real thing - pirateswithoutborders.com 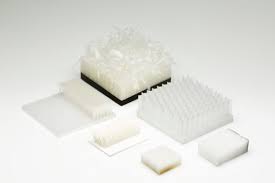 One of the big secrets to polar bear fur's success lies in the fact that each hair is hollow. This characteristic minimizes their thermal conductivity, keeping them from drawing heat away from the animal's body. They're also very elastic, allowing them to stretch instead of breaking, plus they repel water.

A team at the University of Science and Technology of China set out to emulate these qualities, starting with tiny wires made of an element known as tellurium. After being coated in a layer of carbon, these nanowires were dissolved via a chemical process. What resulted was millions of hollow carbon tubes, not unlike polar bear hairs.

Those carbon tubes were subsequently wound together into a "spaghetti-like" arrangement, forming a small cube of insulating aerogel.