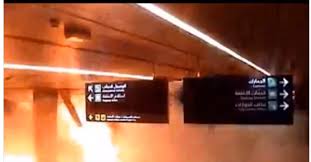 Just with Thursday's tanker incident, Saudi defense leaders are pointing the finger at Iran for ordering its on-the-ground Shia proxy rebel forces in Yemen to conduct the prior attack as well.

The Houthi airport attack now takes on even bigger significance given Thursday morning's dramatic tanker incident. Likely it will be used by Saudi and US officials to build a case against Iran, ultimately to pin responsibility for the tanker incident on Tehran's leadership as well.

The shocking CCTV footage from Abha International Airport was published by the Saudi/UAE outlet Al-Arabiya.