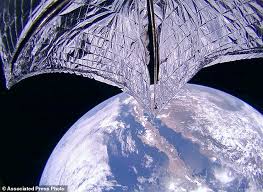 Stunning new images snapped in orbit show LightSail 2's solar sail outstretched and ready to take on the next phase of its mission.

The Planetary Society announced that the 18-foot-wide Mylar sail had successfully deployed earlier this week, following a late-June launch atop a SpaceX Falcon 9 rocket.

It's just one five-thousandth of an inch thick, or about the width of a human hair.

The milestone could pave the way for lower-cost spacecraft propulsion, allowing small craft to be driven by sunlight.

The Planetary Society's crowdfunded craft consists of a CubeSat roughly the size of a loaf of bread, and a now-unfurled solar sail that stretches more than 18 feet wide.

Scientists revealed the mission's progress minute-by-minute in a live-streamed event on Tuesday afternoon.

Images released later in the week confirmed the sail was unfurled and doing well.