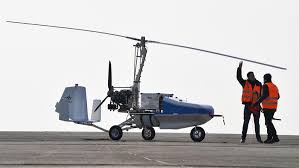 With the explosion of online commerce, the problem of transporting goods from warehouse to consumer becomes increasingly difficult. As part of the effort to overcome this bottleneck, many companies and government agencies have shown increasing interest in various Unmanned Aerial Systems (UAVs) that can operate in urban or difficult-to-access areas.

So far, there's been considerable success, but there is still something of a gap because some cargo is too large for small quadcopters and the like, and too small to justify larger conventional aircraft. It's into this niche that the ALAADy Demonstrator is intended to fit.

A gyrocopter or autogyro is an odd machine that was once considered the symbol of aeronautical progress, but is now largely remembered for fictional secret agent James Bond using one to combat a squadron of Spectre helicopters in the 1967 spy thriller You Only Live Twice.