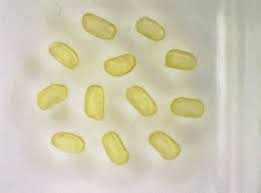 We typically imagine magnets as being solid, said senior author Thomas Russell, a distinguished professor of polymer science and engineering at the University of Massachusetts Amherst. But now we know that "we can make magnets that are liquid and they could conform to different shapes — and the shapes are really up to you."

The liquid droplets can change shape from a sphere to a cylinder to a pancake, he told Live Science. "We can [even] make it look like a sea urchin if we wanted." [9 Cool Facts About Magnets]

Russell and his team created these liquid magnets by accident while experimenting with 3D printing liquids at the Lawrence Berkeley National Laboratory (where Russell is also a visiting faculty scientist). The goal was to create materials that are solid but have characteristics of liquids for various energy applications.

One day, postdoctoral student and lead author Xubo Liu noticed 3D-printed material, made from magnetized particles called iron-oxides, spinning around in unison on a magnetic stir plate. So when the team realized the entire construct, not just the particles, had become magnetic, they decided to investigate further.

Using a technique to 3D-print liquids, the scientists created millimeter-size droplets from water, oil and iron-oxides. The liquid droplets keep their shape because some of the iron-oxide particles bind with surfactants — substances that reduce the surface tension of a liquid. The surfactants create a film around the liquid water, with some iron-oxide particles creating part of the filmy barrier, and the rest of the particles enclosed inside, Russell said.

The team then placed the millimeter-size droplets near a magnetic coil to magnetize them. But when they took the magnetic coil away, the droplets demonstrated an unseen behavior in liquids — they remained magnetized. (Magnetic liquids called ferrofluids do exist, but these liquids are only magnetized when in the presence of a magnetic field.)