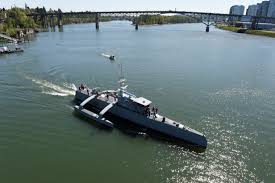 The huge ships referred to as Large Unmanned Surface Vehicle (LUSV) would function as scouts for the main battle fleet, carrying radar and sonar as well as anti-air and cruise missiles.

Proponents of the ships see the role of the vessels as carrying out "3D work" – dull, dirty and dangerous.

A Draft Request for Proposal, posted on the FedBizOpps website, said: "The LUSV will be a high-endurance, reconfigurable ship able to accommodate various payloads for unmanned missions to augment the Navy's manned surface force.

"With a large payload capacity, the LUSV will be designed to conduct a variety of warfare operations independently or in conjunction with manned surface combatants.