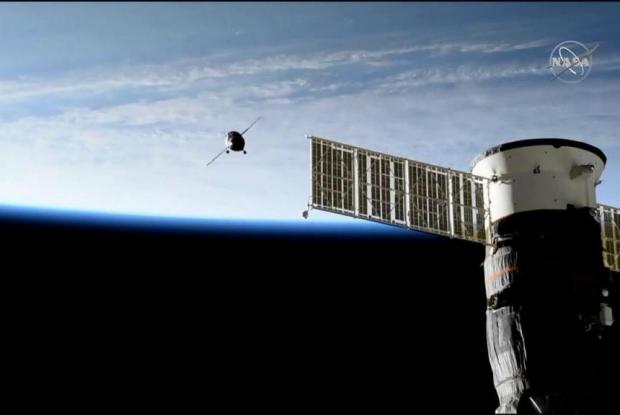 The spacecraft attached to ISS at 11:08 p.m. ET on Monday, as the space station passed 250 miles above Eastern Mongolia.

The first attempt at docking happened on Monday, but the effort had to be aborted after the Kurs' automated rendezvous system experienced a technical glitch.

To ensure the second attempt would be a success, Expedition 60 crew members relocated the Soyuz MS-13 spacecraft on Sunday night.

Russian cosmonaut Alexander Skvortsov piloted the MS-13 capsule during Sunday night's maneuver. He was accompanied by Luca Parmitano and Andrew Morgan. After backing away from the Zvezda port, Skvortsov flew the spacecraft around ISS to approach the Poisk docking port from above.

As the unmanned spacecraft waited to make its second docking attempt, it trailed ISS at a distance of 160 miles. On Monday night, the probe, which is carrying a Russian humanoid robot named Fedor, fired its engines and slowly made its way toward the space station.