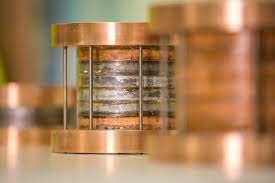 Tokamak Energy magnet engineers have succeeded in producing a magnetic field of 24.4 Tesla in magnets made of high-temperature superconducting material.

The magnet is wound from REBCO (Rare earth – Barium – Copper Oxide) HTS tape. This conduction-cooled all-REBCO magnet achieved its peak field at 21K in a cold bore of 50 mm, which we believe to be record performance. In superconducting terms, 21K is a relatively high temperature. Additionally, the magnet is extremely robust, reliable and simple to manufacture. The engineers have been impressed by the defect tolerance of the coils and their response to a sudden loss of superconductivity, called a quench.

The achievement is an important milestone on the route to commercial fusion energy because high magnetic fields are necessary for tokamak machines to trap the hot fusion fuel, which is in the form of an electrically-charged gas called plasma. High temperature superconducting materials will facilitate the higher magnetic fields necessary for efficient commercial fusion reactors.

The progress of the HTS team has been faster than expected with milestones being hit well ahead of schedule (this milestone was scheduled for late 2020). The next step is to scale up these magnets into the configuration required for tokamaks.