BIGELOW'S NEXT-GENERATION INFLATABLE SPACE HABITAT IS SHOOTING FOR THE MOON 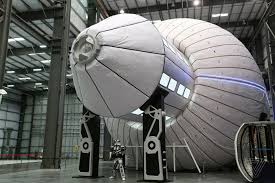 Standing on a metal platform labeled "Does not exist" in the middle of an inflatable bouncy house designed for space, I had one question: where's the bathroom? The mockup of Bigelow Aerospace's flagship space habitat module, the B330, was packed with features, but I wanted to know more about how future astronaut visitors to this proposed space station would deal with the grosser parts of being human.

Bigelow officials were very pleased to point out that the B330 has not one, but two toilets. "The fact that there is two is very unusual because usually there's only one," Colm Kelleher, the deputy program manager for the B330's life support systems, said. "And there have been problems when the toilet breaks down." Each of these new, state-of-the-art toilets consisted of a bucket housed inside a square tent equipped with its own suction hose, along with gloves and a mysterious bag labeled "waste." Similar tents were designated for "showering" or at least scrubbing down with cloths and sanitized napkins. Various sleeping bags adorned the walls where people are meant to catch some shut-eye while strapped into their quarters. Each one sported a tiny alien logo as a nod to billionaire CEO Robert Bigelow's fascination with the search for UFOs.

The entire model was situated in one of the company's cavernous buildings in Las Vegas where Bigelow was busy pitching his expandable habitat to reporters like me. Earlier, flanked by the giant inflatable space habitat, Bigelow told reporters that he supported NASA's plan for a lunar space station. And if the massive prototype to his left wasn't a huge clue about his ambitions, he also wanted us to know that his company, Bigelow Aerospace, is eager to help build it.