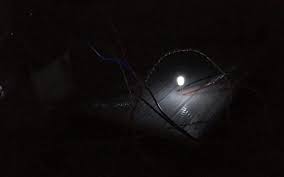 The scientists described their device and reported their findings this week in the online journal Joule.

"Remarkably, the device is able to generate electricity at night, when solar cells don't work," says lead author Aaswath Raman, an assistant professor of materials science and engineering at the University of California, Los Angeles. "Beyond lighting, we believe this could be a broadly enabling approach to power generation suitable for remote locations, and anywhere where power generation at night is needed."

While solar cells are an efficient source of renewable energy during the day, there is currently no similar renewable approach to generating power at night. Solar lights can be outfitted with batteries to store energy produced in daylight hours for night-time use, but the addition drives up costs.

The device developed by Raman and Stanford University scientists Wei Li and Shanhui Fan sidesteps the limitations of solar power by taking advantage of radiative cooling, in which a sky-facing surface passes its heat to the atmosphere as thermal radiation, losing some heat to space and reaching a cooler temperature than the surrounding air.