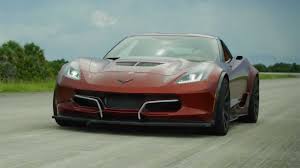 The all-electric Genovation GXE (a converted Chevrolet Corvette) just set a world speed record for being the fastest electric car. Watch footage of the run here.

Back in 2016, Genovation opened order books for the $750,000 GXE. Sales were to start in Q4 2019, which is now right around the corner. There's no word on how many orders were placed or if production and sales are on schedule to begin soon.