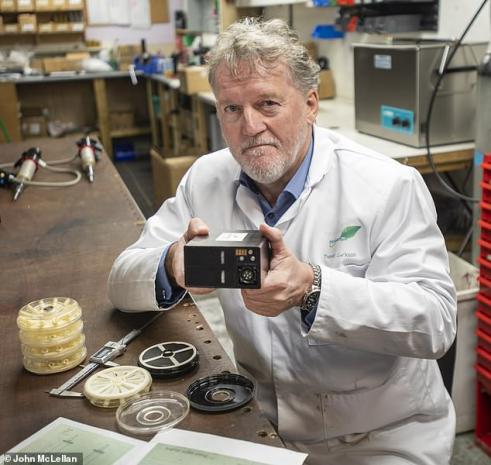 Now imagine that power source uses recycled aluminum, one of the most abundant metals on Earth, and an electrolyte so non-toxic you can drink it. Call this power source a battery. Call it a fuel cell. Call it whatever you like. It is an invention that could upend energy storage as we know it and drive the electrification of transportation — from bicycles and neighborhood electric vehicles to heavy trucks, airplanes, and cargo ships — forward at warp speed.

The person behind all this is UK engineer and former Royal Navy officer Trevor Jackson, who began experimenting with aluminum air batteries at his workshop in the Cornish town of Callington in 2001. At that time, the electrolyte used was extremely caustic and poisonous. After years of experimentation, Jackson devised a new electrolyte — whose composition is a closely guarded secret — he says make it possible for his invention to power an electric car for up to 1,500 miles.

What happens when it runs out of juice? You replace it with a new one while the old one gets recycled. At the beginning of the electric car era when charging infrastructure was nonexistent, the idea of swapping spent batteries for fully charged new ones was considered feasible. Jackson says such a thing could be the future, with his batteries/fuel cells sold at grocery stores and retail outlets. He says the process of disconnecting the old one and connecting the new one will take about 90 seconds.

But is it tin foil hat time? Is this story just another example of some crackpot inventing some radical new product that defies conventional physics, like cold fusion? Lots of people think so, and in fact Jackson says powerful forces have attempted to prevent his idea from reaching a larger audience. But an independent evaluation by the UK Trade and Investment agency in 2017 said Jackson's invention was a "very attractive battery" based on "well established'" technology, and that it produced much more energy per kilogram than standard electric vehicle types, according to a report in the Daily Mail.

Jackson says the battery for that long range Tesla Model S costs about £30,000. Tesla aficionados will probably quibble with that number but Jackson claims his aluminum-air battery/fuel cell that could power the same car for longer would cost just £5,000. Of course, it the owner has to spend £5,000 every 1500 miles, the economic case for the new energy source is compromised somewhat. Time will tell.

Think this is all crazy talk? Consider this. Jackson has just signed a multi-million dollar deal with Austin Electric, an engineering firm based in Essex which now owns the rights to use the old Austin Motor Company logo. It  will begin putting thousands of them into electric vehicles next year. According to Austin's chief executive, Danny Corcoran, the new technology is a "game-changer. It can help trigger the next industrial revolution. The advantages over traditional electric vehicle batteries are enormous."