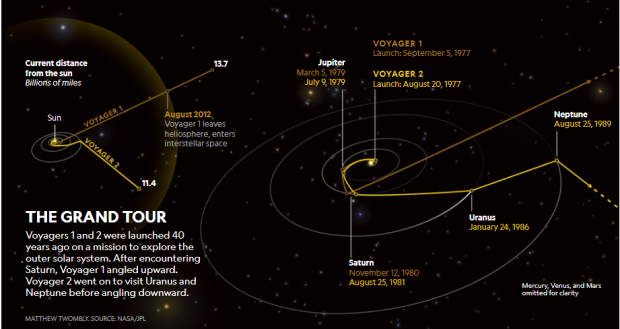 IN THE BLACKNESS of space billions of miles from home, NASA's Voyager 2 marked a milestone of exploration, becoming just the second spacecraft ever to enter interstellar space in November 2018. Now, a day before the anniversary of that celestial exit, scientists have revealed what Voyager 2 saw as it crossed the threshold—and it's giving humans new insight into some of the big mysteries of our solar system.

The findings, spread across five studies published today in Nature Astronomy, mark the first time that a spacecraft has directly sampled the electrically charged hazes, or plasmas, that fill both interstellar space and the solar system's farthest outskirts. It's another first for the spacecraft, which was launched in 1977 and performed the first—and only—flybys of the ice giant planets Uranus and Neptune. (Find out more about the Voyager probes' "grand tour"—and why it almost didn't happen.)

On August 17, 1981, the Voyager 2 spacecraft flew within 5.5 million miles of Saturn's rings, capturing a spectacular false-color view in visible light and ultraviolet.

Voyager 2 completed its final planetary flyby on August 25, 1989, as it zoomed by Neptune—capturing this haunting glimpse at the planet's deep blue atmosphere.

Voyager 2's charge into interstellar space follows that of sibling Voyager 1, which accomplished the same feat in 2012. The two spacecrafts' data have many features in common, such as the overall density of the particles they've encountered in interstellar space. But intriguingly, the twin craft also saw some key differences on their way out—raising new questions about our sun's movement through the galaxy.

"This has really been a wonderful journey," Voyager project scientist Ed Stone, a physicist at Caltech, said in a press briefing last week.

"It's just really exciting that humankind is interstellar," adds physicist Jamie Rankin, a postdoctoral researcher at Princeton University who wasn't involved with the studies. "We have been interstellar travelers since Voyager 1 crossed, but now, Voyager 2's cross is even more exciting, because we can now compare two very different locations ... in the interstellar medium."