> Facebook Has SUSPENDED Me For Reporting on CIA Whistleblower Calling It "Crime Activity" - pirateswithoutborders.com 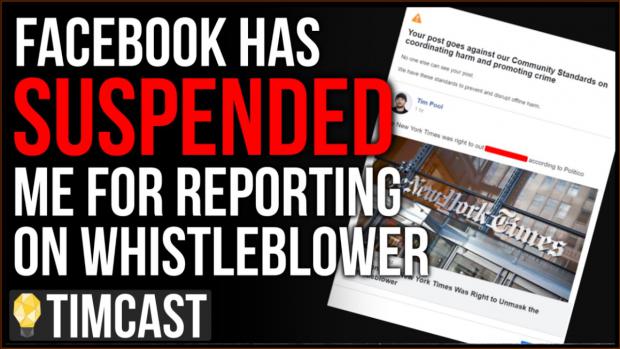 Facebook Has SUSPENDED Me For Reporting on CIA Whistleblower Calling It "Crime Activity." Recently it was announced that Facebook and Youtube will be banning any content naming the whistleblower. Youtube force privated my first video on the matter and confirmed to me they will not be reinstating it.

Facebook has taken down a series of my posts providing reporting and evidence that the named person may in fact be the CIA whistleblower. One post praising the new york times for outing the whistleblower was removed and this led to my suspension from Facebook.

As it was the first time I have ever been suspended for posting something on Facebook it was only a temporary ban. As of the filming of this video I had 6 hours left before I could post again.

Facebook told me that reporting on this person was a "crime activity" that could cause harm even though Fox news has already named the individual twice and many other high profile personalities and news outlets have done so as well.