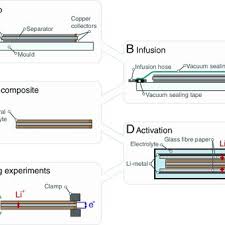 Created by a team at Sweden's KTH Royal Institute of Technology, the three-layer solid-state material consists of two sheets of lithium ion-doped carbon fiber, between which is sandwiched a sheet of a solid electrolyte.

The latter is more specifically known as a "structural battery electrolyte," and when a low-voltage DC current is run through it, ions migrate from one sheet of carbon fiber to the other (passing through the electrolyte). This causes the discharging layer of carbon to contract, while simultaneously causing the charging layer to expand. As a result, the entire piece of material bends to one side.

Even once the current is removed, the composite remains in this shape. If the current is reversed in a subsequent electrical charge, though, the lithium ions migrate in the opposite direction.