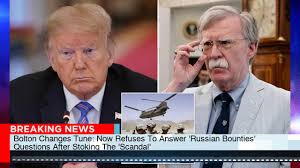 By middle of last week we observed of the Russian bounties to kill American troops in Afghanistan story that "at this point this non-story looks to be dead by the weekend as it's already unraveled."

Recall too that John Bolton, busy with a media blitz promoting his book, emerged to strongly suggest he had personal knowledge that Trump was briefed on the matter. The former national security adviser called the Trump denial of being briefed "remarkable". Well, look who is now appearing to sing a different tune. A week ago Bolton was all too wiling to voluntarily say Trump had "likely" been briefed and that was a big scandal.