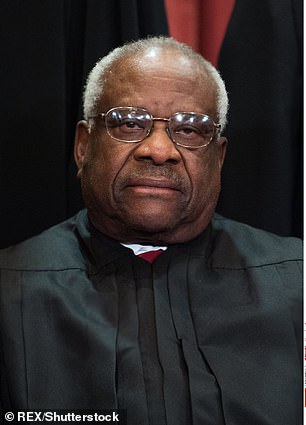 The banner with the words 'Welcome to Clifton, Where Black Lives Matter' was hung over the town's Main Street last month in what Mayor William R Hollaway called 'a first step' toward discussions of racial equality.

While the gesture received mostly positive reactions from members of the community, it drew outrage from some in the surrounding area.

Among the furious critics was Ginni Thomas, according to The Washington Post, which viewed an email sent to town officials from her account.

Ginni Thomas, the wife of the only black justice on the US Supreme Court and an outspoken conservative, runs a consulting firm in Burke, about eight miles east of Clifton.

Her email dated June 24 states: 'BLM is a bit of a dangerous Trojan Horse and they are catching well-meaning people into dangerous posturing that can invite mob rule and property looting.

'Let's not be tricked into joining cause with radical extremists seeking to foment a cultural revolution because they hate America.'