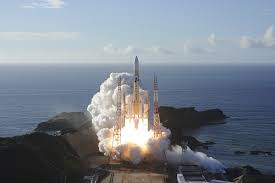 The liftoff of the Mars orbiter named Amal, or Hope, starts a rush to fly to Earth's neighbor that is scheduled to be followed in the next few days by China and the United States.

At the space center in Dubai, people watching were transfixed by the liftoff, then cheered and clapped, with one woman with offering a celebratory cry common for weddings.

Amal blasted off from the Tanegashima Space Center aboard a Mitsubishi Heavy Industries' H-IIA rocket on time at 6:58 a.m. (2158 GMT Sunday) after being delayed five days by bad weather.

Mitsubishi later said the probe successfully separated from the rocket and was now on its solo journey to Mars.

The probe was sending signals that would be analyzed later but everything appeared good for now, Omran Sharaf, the UAE Mars mission director told journalists in Dubai about an hour and a half after liftoff.