> US Energy Department rolls out 10-year plan for QUANTUM INTERNET that would be virtually... - pirateswithoutborders.com 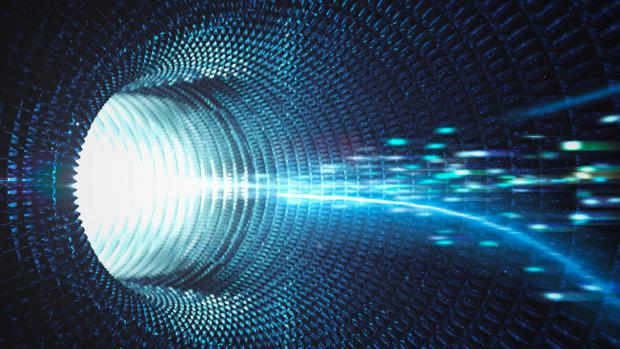 The US Energy Department says it plans to build a quantum internet that uses entangled particle to almost instantly and securely transmit data across a fiber optic network.

In a press conference this week, the agency described its vision of a prototype quantum network that it says could be completed within 10 years.

The proposed network would utilize entangled particles to transmit data almost instantly and has already been prototyped by a team at Argonne National Laboratory near Chicago.

In February scientists from the Department of Energy (DOE)  in Lemont, Illinois, and the University of Chicago entangled photons across a 52-mile 'quantum loop.'

They were successfully able to establish one of the longest land-based quantum networks in the nation.

According to the DOE, that network will soon be connected to its Fermilab in Batavia, Illinois, to make a three-node, 80-mile testbed.

Before the network becomes a reality, however, scientists will be tasked with inventing entirely new technologies and harnessing the proverbial black box of quantum mechanics.

'This work entails defining and building entirely new fields of study, and with them, new frontiers for technological applications that can improve the quality of life for many around the world and support the long-term competitiveness of our city, state, and nation,' said Robert J. Zimmer, president of the University of Chicago.