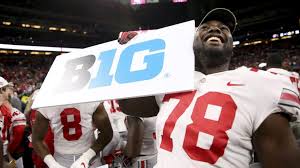 It follows UConn's decision to scrap its 2020 season entirely due to issues with traveling caused by the tri-state quarantine.

Here's more from the NYT:

The decision, after weeks of announcements from smaller conferences and some individual schools that they would not play this fall, had potentially substantial implications for the rest of college sports.

The move, about five months after the virus's threat led to the cancellation of the N.C.A.A.'s basketball tournaments, extended the greatest crisis in the history of college athletics, a multibillion-dollar industry with extraordinary cultural clout. But, by stopping short of canceling the season outright and saying that it would evaluate the possibility of playing in the spring, the league offered a lifeline for some of the nation's most celebrated athletic brands, many of which play in the Power 5 conferences.

In a statement on Tuesday, the Big Ten commissioner, Kevin Warren, said it had become "abundantly clear that there was too much uncertainty regarding potential medical risks to allow our student-athletes to compete this fall."

The student-athletes have been working too hard for their season to be cancelled. #WeWantToPlay https://t.co/lI3CCKZ4ID