> The Air Force Just Tested "Robot Dogs" For Use In Base Security - pirateswithoutborders.com 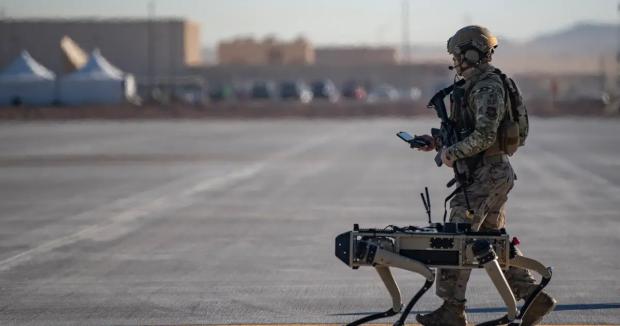 They look like they were cast straight from an episode of Black Mirror, and eventually, their mission could be similar in some ways, but for now, robot dogs are stretching their legs in the big test exercise environment for the United States Air Force.

Last week, the U.S. Air Force hosted the second demonstration of its new Advanced Battle Management System (ABMS), a digital battle network system designed to collect, process, and share data among U.S. and allied forces in real-time. The ABMS has already undergone several tests, including a live-fire exercise earlier this year conducted with data and communications provided, in part, by SpaceX Starlink satellites.

The highlight of last week's demonstration was the use of multiple distributed sensors to detect and shoot down mock Russian cruise missiles. The system involves 5G and 4G networks, cloud computing systems, and AI systems to provide an unprecedented level of situational awareness and course of action decision making. ABMS is a top modernization priority for the Department of the Air Force, which is dedicated $3.3 billion over five years to develop and deploy the architecture and related systems. Senior Air Force leaders cite the system as one of the most pressing capabilities for success in several key theaters of operations.