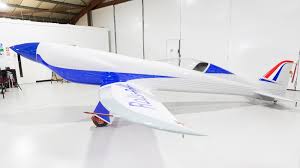 To recap our previous coverage, plans call for the single-seater ACCEL to incorporate three axial 750R electric motors in its 500-hp powertrain. Power will be provided by a battery pack consisting of over 6,000 individual cells, offering a range of 200 mi (320 km) on a single charge.

The technology has now been tested in a full-scale replica of the aircraft's core, called the ionBird. This name pays tribute to the term "iron bird," which describes the propulsion-testing rigs traditionally used in the development of conventional aircraft.