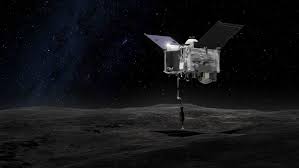 Launched atop an Atlas/Centaur booster from Space Launch Complex 41 at Cape Canaveral Air Force Station in Florida on September 8, 2016 at 7:05 pm EDT, the robotic OSIRIS-REx probe spent four years matching orbits to rendezvous with Bennu before making a detailed survey of the body's surface to find a safe area of scientific interest.

Because Bennu is 205 million miles (330 million km) from Earth, it takes a radio signal 18 minutes to reach the spacecraft from mission control, so today's Touch-And-Go (TAG) maneuver was carried out under completely autonomous control by the onboard computer, relying on updated instructions from NASA engineers.

During the approach, the robotic arm called the Touch-And-Go Sample Acquisition Mechanism (TAGSAM) was deployed with its disk-shaped sample collection head forward and the solar panels angled back to avoid accidental contact with the asteroid. The spacecraft then slowly approached the 26-ft (8-m) diameter "Nightingale" landing site from its normal orbit altitude of 2,500 ft (770 m) using its Natural Feature Tracking system to make a safe approach and then pull back from Bennu before a collision could occur