NawaStitch promises to make carbon composites even lighter and stronger 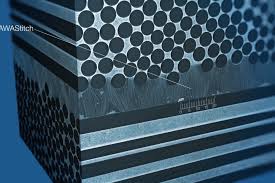 We've been covering Nawa for some time now in the company's original field of ultracapacitor manufacturing as well as its recent push into the lithium battery space, in which Nawa has claimed its VACNT structures will be the world's fastest electrodes, allowing 3X the energy density, 10X the power density, much faster charging and battery lifespans five times as long.

Nawa's advantages come from its secret sauce: a super-quick, single-step nanotube growing process, which CEO Pascal Boulanger has told us "is the same process that's used for coating glasses with anti-reflective coatings, and for photovoltaics. It's already very cheap." Extremely strong and highly conductive, these nanotubes offer clear advantages in the electronics field, but Nawa is now looking at using them to advance materials as well.