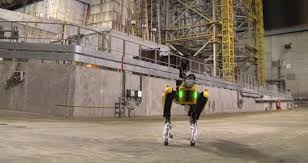 Researchers at the University of Bristol and nuclear experts from the State Specialized Enterprise "Central Enterprise for Radioactive Waste Management" recently deployed the four-legged robot to the Chernobyl Nuclear Power Plant Zone that has been abandoned since the catastrophic meltdown in 1986. The site has since been covered up with layers of steel and concrete to keep nuclear material from escaping into the atmosphere.

Weekly measurements around the Chernobyl site are mainly done by humans, which puts them at risk, unlike Spot, a robot who could do so without putting humans in grave danger of radiation poisoning.

Dr. Dave Megson-Smith, a researcher at the University of Bristol, was one of the scientists aiding Spot on its nuclear power plant adventure. Megson-Smith specializes in sensor development and equipped Spot with a collimated radiation sensor.