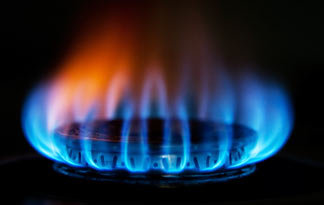 The process can be done in just 15 minutes using a low-toxicity mixture.

It may be a fossil fuel, but natural gas remains a key energy source for now, and some argue it might help us bridge the gap towards more renewable energy. It still has its problems though – the stuff can be hazardous to store or transport, and it is often converted into liquid form to make it easier to work with. However, that requires extremely cold temperatures of around -162 °C (-260 °F).

An emerging method is to instead convert the gas into a solid for easier transport and storage. In fact, nature already does this under certain conditions, as molecules of natural gas can become trapped in "cages" of water molecules, forming what are known as gas hydrates or combustible ice. It's far from a quick process though, taking upwards of millions of years.

Researchers have been trying to speed that up, and now the NUS team claims the fastest conversion time on record. The key ingredient in the new mixture is L-tryptophan, an amino acid that speeds up the reaction rate and traps more of the gas into solid hydrates faster. Taking just 15 minutes, the team says the new method is more than twice as fast as the current standard.

"Our breakthrough can really be put into perspective when you consider that it takes millions and millions of years for gas hydrates to form in nature, yet with our correct addition of secret ingredients to the system in small quantities, the same process can be effected in the laboratory in a matter of minutes," says Gaurav Bhattacharjee, an author of the study.

The end product is much more convenient and safer to store and transport. As a block of ice it's shrunk in volume by 90 times, and is non-explosive and stable enough to be stored in a regular freezer at -5 °C (23 °F). The new method also apparently requires less toxic additives than usual.