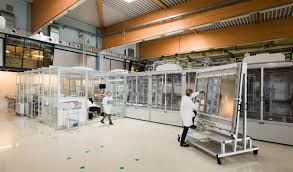 Oxford is working with leading photovoltaic equipment supplier, Meyer Burger. They will install a silicon heterojunction solar cell line, enhanced with production equipment for the perovskite top cell. The fully integrated line will be built at an industrial site in Germany and will start production in 2021 at what will be about a 200 MW/year plant.

In 2019, Oxford PV raised £31 Million in the first close of its Series D funding round.

In November, 2020, Oxford PV was awarded €8.8 million from a German regional government, Brandenburg Ministry of Economics, as part of the EU's Regional Development Program. Oxford PV is investing €44 million in the expansion of its manufacturing facility in Brandenburg an der Havel, where the company has been based since the end of 2016.

* Enhances the 100 GW photovoltaic industry
When built on top of conventional silicon solar cells, the resulting tandem cells can break through the silicon photovoltaic performance barrier