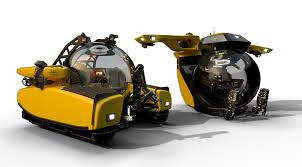 The key to Triton's market dominance has been its mastery of the acrylic sphere. Its bubble-subs give drivers and passengers an ultra-widescreen panoramic view of the world under the water, totally free from optical distortion.

The hull simply disappears when you're underwater; editors on the BBC's Blue Planet II series couldn't distinguish between footage shot from inside the thick bubble and footage shot from external cameras. You're sitting there thousands of feet under the surface, totally immersed in the undersea world, and yet free to move around in air-conditioned comfort at terrestrial pressure levels.

In the past, Triton has made these spheres by casting two separate acrylic half-domes of Plexiglass and sticking them together with an invisible adhesive, but in recent years as the company's ambitions have expanded, it's been creating them from a single slab that's heated and then formed into shape.