> Yacht of the future: Florida-based designer unveils plans for an eco-friendly... - pirateswithoutborders.com

Yacht of the future: Florida-based designer unveils plans for an eco-friendly... 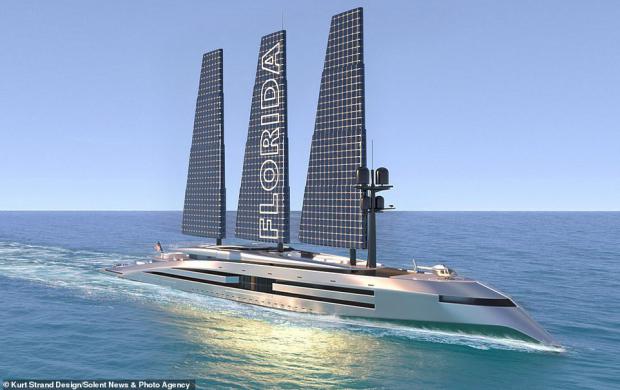 Known as the Florida and fitted with a helipad, the yacht is powered by three enormous 262ft tall carbon fibre 'sails' using either solar energy or wind.

The innovative 525ft long design, which would put the vessel in the top five longest superyachts in the world, was dreamed up by Florida-based Norwegian designer Kurt Strand and is set to go on sale in 2026.

On days when there is no wind, the super yacht will be able to transform into 'solar sail' mode.

This means the control system will automatically adjust the sails into the perfect angle to absorb the most sunlight.

As well as the hydraulic, retractable sails with stabilizers, the vessel boasts hydro generators on the keel which produce electricity when the yacht is moving.

All the power is stored in a five mega watt battery bank and can be used to create hydrogen on board. That means that if there is a day of no sun or wind, the yacht is able to be run on hydrogen fuel cells.