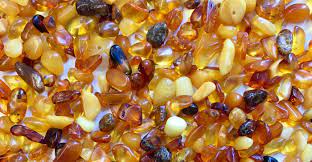 For centuries, people in Baltic nations have used ancient amber for medicinal purposes. Even today, infants are given amber necklaces that they chew to relieve teething pain, and people put pulverized amber in elixirs and ointments for its purported anti-inflammatory and anti-infective properties.

Now, scientists have pinpointed compounds that help explain Baltic amber's therapeutic effects and that could lead to new medicines to combat antibiotic-resistant infections.

Each year in the U.S., at least 2.8 million people get antibiotic-resistant infections, leading to 35,000 deaths, according to the U.S. Centers for Disease Control and Prevention.

"We knew from previous research that there were substances in Baltic amber that might lead to new antibiotics, but they had not been systematically explored," says Elizabeth Ambrose, Ph.D., who is the principal investigator of the project. "We have now extracted and identified several compounds in Baltic amber that show activity against gram-positive, antibiotic-resistant bacteria."