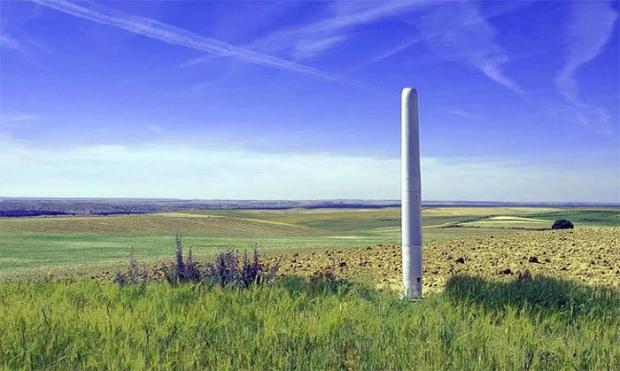 The bladeless turbines are the work of Madrid-based startup Vortex Bladeless. Thanks to its innovative design, the company recently won the approval of Norway's state energy company, Equinor, which also placed the company on a list of the 10 most exciting startups in the energy sector.

Bladeless turbines can go where regular, bladed ones cannot

Vortex's design consists of a 3-meter (10 feet) tall curve-topped cylinder fixed vertically with an elastic rod. When hit by the wind, the cylinder waggles back and forth like a bobblehead toy. This design allows the turbine to oscillate within the wind range and produce electricity from the vibration. The cylinders' small size and lack of turbine blades could likely allow for the construction of wind farms in places where traditional bladed turbines would be impractical.

"Our technology has different characteristics which can help to fill the gaps where traditional windfarms might not be appropriate," says David Yañez, the founder of Vortex Bladeless. The gaps that Yañez refers to include urban and residential areas where the impact of a traditional windfarm would be too great and the space to build too small.

In addition, the small size of Vortex's bladeless turbine fits the current trend for installing small-scale, on-site energy generation – usually solar panels – that have helped many homes and companies save on their energy bills. Yañez even calls the turbine wind power's answer to the home solar panel.

"They complement each other well, because solar panels produce electricity during the day while wind speeds tend to be higher at night," he said. "But the main benefit of the technology is in reducing its environmental impact, its visual impact, and the cost of operating and maintaining the turbine."