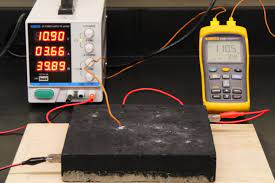 Normally, concrete is an insulator against electricity, but recent research has focused on making it conductive. Adding some form of carbon to the mix usually does the trick, with past versions being tested in airport runways that automatically melt snow.

For the new study, researchers at MIT's Concrete Sustainability Hub (CSHub) and the French National Center for Scientific Research (CNRS) added nanocarbon black, which is a cheap carbon material that boasts excellent conductivity, to concrete. At just a four-percent volume, the concrete was able to carry an electrical current – and as a result, it gave off heat too.

"Joule heating (or resistive heating) is caused by interactions between the moving electrons and atoms in the conductor," says Nicolas Chanut, co-author of the study. "The accelerated electrons in the electric field exchange kinetic energy each time they collide with an atom, inducing vibration of the atoms in the lattice, which manifests as heat and a rise of temperature in the material."