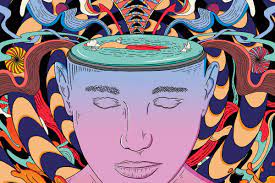 It stimulates receptors for serotonin, which mediates satisfaction and happiness

AAZ-A-154 is a 'previously unstudied' molecule that has the potential to act on beneficial pathways in the brain without causing hallucinations.

It stimulates receptors for serotonin – a key hormone sent between nerve cells in our brain that stabilises our mood, well-being and happiness.

In experiments on mice, AAZ-A-154 produced rapid and long-lasting antidepressant-like effects after a single dose, the US researchers found – and, if synthesised, could be an effective treatment for humans.

Researchers are now trying to identify alternative medications that offer the benefits of psychedelics without causing often distressing hallucinations.