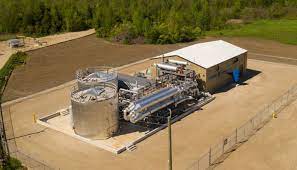 As the world shifts towards renewable energy, grid-scale storage is becoming ever more crucial. Getting carbon emissions to net-zero will require a patchwork of technologies to smooth out unpredictable and inconvenient generation curves, with pumped hydro, huge lithium-ion batteries, tanks full of molten salt or silicon, thermal bricks, or heavy blocks stacked up in towers or suspended in mineshafts all in the mix.

Pumped hydro accounts for around 95 percent of the world's grid energy storage and gigwatt-capacity plants have been in operation since the 1980s. The problem is that you need a specific type of location and a staggering amount of concrete to build a pumped hydro plant, which works against the goal of reaching net zero. Rotting vegetation trapped in dams also contributes to greenhouse gas emissions. Meanwhile, the biggest mega-batteries built so far are only in the 200 MW/MWh range, though installations bigger than 1 GW are planned.