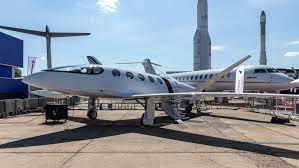 The company says it's just taken delivery of its first electric motor, one of three Magnix Electric Propulsion Units the Alice will use to power its three variable pitch pusher props, one on a pod at the end of each wing and a third on the tail. The latter is designed to accelerate fast-moving air around the fuselage and turn the whole body into a bonus wing surface for extra lift.

The prototype is certainly a striking looking aircraft, all space-age looking with its big v-tail and that tastefully squashed high-lift fuselage. Once everything's all hooked up, it'll carry two crew and nine passengers at cruise speeds up to 253 mph (407 km/h), and Eviation says the low noise output of its electric powertrain will make a solid contribution to the comfort factor in the back.

For any electric aircraft, 506 miles is a pretty solid range figure at this point, and in order to manage that the Alice needs to carry a monstrous 8,200 lb (3,720 kg) of lithium-ion battery – more than half of the aircraft's 14,700-lb (6,668-kg) maximum takeoff weight. It's built from the ground up using lightweight composite materials to compensate.

Eviation says the Alice and other early electrics like it will be the start of a price-driven snowball in the aviation business. Similar to electric cars, they'll likely be more expensive up front than a traditional fuel-burning plane due to the high cost of lithium batteries – but their vastly reduced maintenance and fuel costs will make them a ton cheaper to run. Eviation is betting that it won't take too long before fossil burners are struggling to compete – at least in this size class and for shortish flights of 500 miles (805 km) or less.