> Bill Gates' Scary Recipe for How to Feed the World - pirateswithoutborders.com 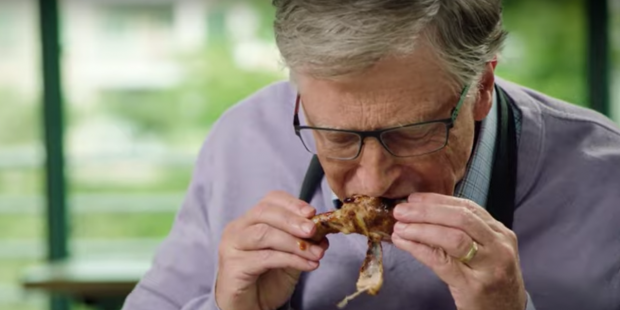 If Bill Gates has his way, the food in our future will little resemble what's on our plates today. Gates and his agribusiness industry partners are proposing to transform our food and how it is produced.

To the techno-food industrialists, hunger and climate change are problems to be solved with data and engineering. The core ingredients of their revolutionary plan: genetic engineering — and patenting — of everything from seeds and food animals, to microbes in the soil, to the processes we use to make food. Local food cultures and traditional diets could fade away as food production moves indoors to labs that cultivate fake meat and ultra-processed foods.

Gates says rich countries should shift entirely to synthetic beef. And he has the intellectual property rights to sell them. As a food that can help fix the climate, Gates touts the Impossible Burger, a plant-based patty made from genetically engineered soy and textured with engineered yeast. Its manufacturer, the Gates-funded Impossible Foods, has two dozen patents and more than 100 patents pending to artificially replicate cheese, beef and chicken and permeate these products with manufactured flavors, scents and textures.

According to its investor presentation, Ginkgo plans to create up to 20,000 engineered "cell programs" (it now has five) for food products and many other uses. Axios reports that the company plans to charge customers to use its "biological platform" like Amazon charges for its data center, and will take royalties like apps in the Apple Store. Ginkgo's customers, the investor pitch makes clear, are not consumers or farmers, but rather the world's largest chemical, food and pharmaceutical companies.