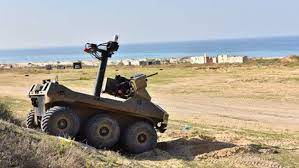 The tank-like robot has the ability to transport itself to a preset destination. It can also spot and avoid obstacles by utilizing dozens of sensors and an advanced driving system. Moreover, the platform can self-destruct if it falls into enemy hands.

"We have led a groundbreaking technological development – an independent robot that reduces the combat soldier's friction with the enemy and prevents risks to human life. It even knows how to charge itself – almost like an iRobot," Head of Autonomy and Robotics at the Israel Defense Forces, Lt. Col. Nathan Kuperstein, remarked.

A photo of the Jaguar at the Gaza border has surfaced online. The Dead District spotted the hi-tech equipment moving close to the fences separating the two areas.