Build Your Own Solar-Powered Backup System 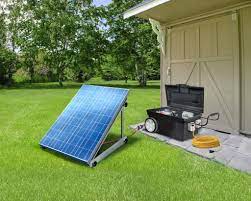 While generators make a lot of sense in an emergency situation, they do have some tactical downsides. First of all, most generators are relatively loud when they are running, and when coupled with a grid-down situation in which everything around happens to be very silent because the power's out, you can see how being loud is a disadvantage. Essentially, everyone within a two-mile radius will hear your generator. Perhaps they will come inquiring as to why it is that you're so well-prepared while they aren't. Additionally, there is the problem of fueling that generator; you need to have adequate stores of gasoline, diesel or propane, and not only that, you need to have oil and filters to provide the necessary oil changes, which increase in frequency the more you run the generator.

Did you know, however, that you can devise a simple solar panel system for use during emergencies? It's totally possible to set up a few panels in a freestanding system, coupled with a modest battery bank, so that you can generate at least some power during a grid-down situation. Although a handful of solar panels won't generate the same amount of power as a large generator, they can still be used to power things like laptops, communications devices, and medical equipment so that you aren't totally hung out to dry when the power goes off. Additionally, an emergency solar power system is totally silent, so no one will even know you have emergency power. Here's how to build a simple system: