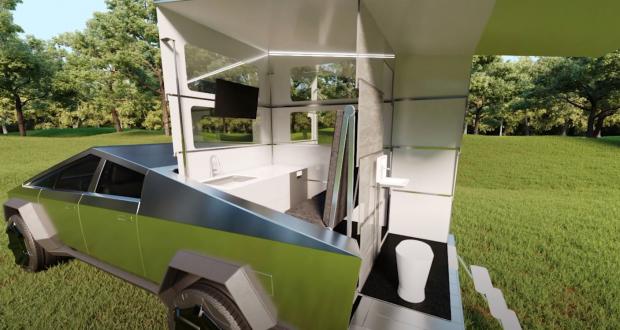 There's no denying the influence Elon Musk has on fans and owners of Tesla products. Case-in-point is the Tesla Cybertruck, which still hasn't been revealed in final production form but has gobs of reservation holders waiting in the wings for the all-electric pickup. The hype is so strong that we've already seen everything from tacky Cybertruck-themed truck nuts to campers designed and waiting for the truck to arrive.

We took a deep dive into an innovative concept camper from Cyberlandr back in April. It's designed to fit entirely into the Cybertruck's bed when traveling, thus preserving the truck's aerodynamics for a minimal impact on range. At the campsite, the camper raises out of the bed to create a compact living space that includes a full kitchen and sleeping area for four with a separate bathroom.

It's certainly a smart idea, and it seems Musk also approves of the camping concept for the Cybertruck, as he recently took to Twitter with a short message simply calling the Cyberlandr "cool."

Of course, this is all just theory for now. Tesla hasn't yet revealed the Cybertruck's final production form, so there aren't even specific dimensions to base a prototype camper shell on, never mind build one. Still, that hasn't stopped excited Cybertruck fans from shelling out cash to reserve a Cyberlandr camper. As of the end of April, Cyberlandr Co-Founder Bill French said the company had over 1,000 reservations. Given the not-insubstantial cost of the all-electric camper, the reservations total over $50 million in potential revenue, provided all the reservations convert to sales.