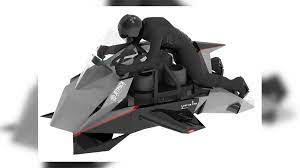 When we last caught up with David Mayman, inventor, madman and one of the world's very few expert jetpack pilots, he was starting work on a new personal flight device very different to anything else on the market. The Speeder would be a very small VTOL aircraft, powered by the same extremely powerful miniature jet turbines Mayman has been flying his jetpacks around on. In this case, it would carry much higher loads, including up to two people, at higher speeds, and it'd also be much quicker and easier to deploy than a jetpack – you'd just hop on and fly.