> Homeschooling Is Surging, and Especially in Homes the Left May Find Troubling - pirateswithoutborders.com

Homeschooling Is Surging, and Especially in Homes the Left May Find Troubling 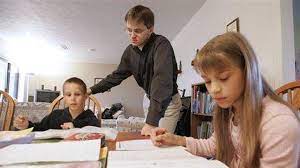 According to the Associated Press, parents took their children's education into their own hands and found that their children seemed to be performing much better under their own tutelage than under the public school system's. The surge itself was confirmed by the U.S. Census Bureau that reported homeschooling more than doubled between March and September of 2020, going from 5.4 percent to 11 percent.

The biggest jump of all? The AP reported that black households skyrocketed from the single digits to the double. What's more, some are motivated by religious reasoning:

Black households saw the largest jump; their homeschooling rate rose from 3.3% in the spring of 2020 to 16.1% in the fall.

The parents in one of those households, Arlena and Robert Brown of Austin, Texas, had three children in elementary school when the pandemic took hold. After experimenting with virtual learning, the couple opted to try homeschooling with a Catholic-oriented curriculum provided by Seton Home Study School, which serves about 16,000 students nationwide.