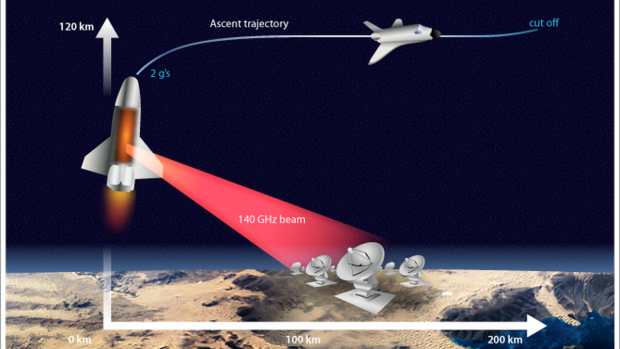 This limitation could be overcome by wirelessly transmitting the needed power to the rocket through a beam of microwave radiation. A research team from Japan has investigated the viability of using such microwave-powered propulsion for real-world applications.

In a study published this month in the Journal of Spacecraft and Rockets, researchers led by the University of Tsukuba have demonstrated wireless power transmission via microwaves for a free-flying drone and determined the efficiency of this process.

Previous analyses of this kind were carried out decades ago and mostly considered microwaves of a low frequency (a few gigahertz; GHz). Given that the power transmission efficiency increases as the operating frequency is raised, the team behind this latest research used microwaves with a relatively high frequency (28 GHz). The team's drone weighed roughly 0.4 kilograms and hovered for 30 seconds at a height of 0.8 meters above the source of the microwave beam.

The researchers measured the efficiencies of the power transfer through the beam (4%), the capture of microwaves by the drone (30%), the conversion of microwaves to electricity for propulsion (40%), and other relevant processes. Based on this information and an analytical formula, they calculated the overall power transmission efficiency in their experiment to be 0.43%. For comparison, in a previous study, the team measured the total transmission efficiency for a fixed-position (rather than free-flying) drone to be 0.1%.

"These results show that more work is needed to improve the transmission efficiency and thoroughly evaluate the feasibility of this propulsion approach for aircraft, spacecraft, and rockets," explains Shimamura. "Future studies should also aim to refine the beam-tracking system and increase the transmission distance beyond that demonstrated in our experiment."

Although microwave-powered rocket propulsion is still in its early stages, it could someday become a superior way to launch rockets into orbit given the high onboard-fuel demands of conventional propulsion techniques.