Virgin Hyperloop explains how passenger pods will travel at 670mph... 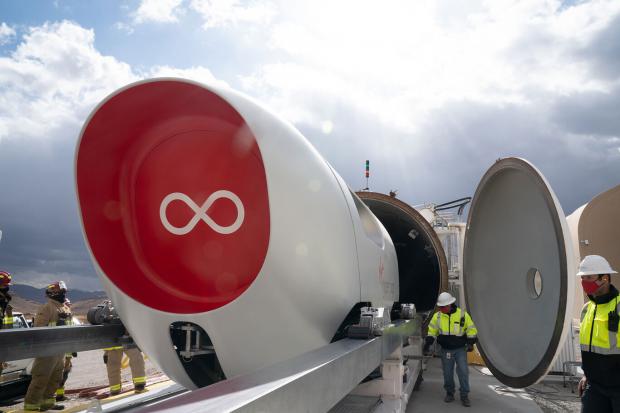 Virgin Hyperloop's cutting-edge technology can 'comfortably, safely and quietly' shuttle customers along at speeds of up to 670 miles per hour, according to a new promo video from the transportation start-up.

A clip released on Monday explains how passenger pods accelerate through a near-vacuum via electric propulsion, gliding along without actually touching the track thanks to magnetic levitation that limits aerodynamic drag.

According to the promo, the company's proprietary design makes it ten times faster than the fastest mag-lev trains operating today in in Japan, China and South Korea.

'It unveils details on our 'smart vehicle, dumb road' commercial system architecture,' a representative said of the clip, 'including the on-board levitation engines, propulsion engines, and high-power batteries that have never been publicly shown.'

It also sings the praises of the trains as an efficient, economical and sustainable mode of transportation with zero carbon emissions.

Virgin Hyperloop's 670 mph speed is ten times faster than a typical commercial train and three times as fast as current high-speed rail. (The top speed for Amtrak's Acela trains is about 150 mph.)

It's even faster than most commercial jets, which reach cruising speeds of about 460 to 575 mph.

Unlike commercial jets, the Hyperloop would have zero direct carbon emissions.

Hyperloop pods would travel in clusters but aren't connected like traditional railroad cars, and wouldn't have to be directed at the same destination.