> Nearby Planetary System May Have The Right Conditions To Host Life - pirateswithoutborders.com

Nearby Planetary System May Have The Right Conditions To Host Life 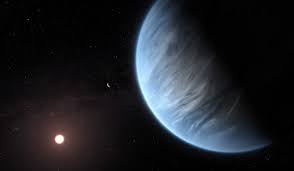 An artist's impression of L 98-59b, one of the planets in the L 98-59 system 35 light-years away. The system contains four confirmed rocky planets with a potential fifth, the furthest from the star, being unconfirmed. (ESO/M. Kornmesser)

Using the European Southern Observatory's Very Large Telescope in Chile, a team of astronomers studied the planets around the nearby star L 98-59, which has planets resembling those in the inner solar system.

Among their findings is a planet with half the mass of Venus, which is the lightest exoplanet ever measured with the radial velocity technique, according to a statement. They also discovered a planet that could be an ocean world as well as a possible planet in the habitable zone.

"The planet in the habitable zone may have an atmosphere that could protect and support life," María Rosa Zapatero Osorio, an astronomer at the Centre for Astrobiology in Madrid, Spain, and one of the authors of the study, said in the statement.

The new findings mark a milestone in scientists' quest to find life on other planets.

The findings include a technical breakthrough, since the team used the radial velocity method to discover the small mass of the innermost planet in the system.