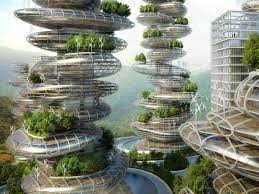 The Farmscraper, which has the official title of Jian Mu Tower, would rise to a height of 218 m (715 ft) in Shenzhen, China. Most of the available floorspace on its 51 floors would be given over to office space, though it would also include a food court and supermarket, and would be topped by a rooftop terrace area.

Additionally, a lot of its glazed facade would be used for the hydroponic cultivation of crops, producing an ambitious yield per year.