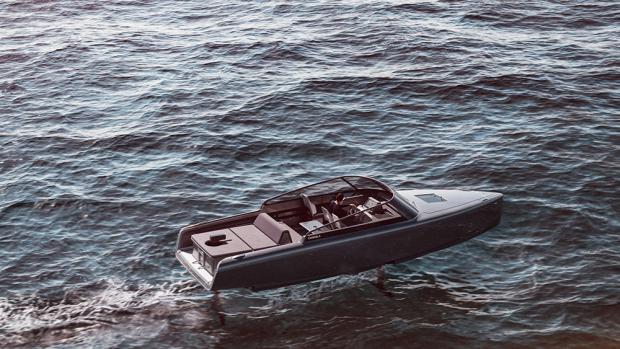 The company has now applied its expertise in low-drag nautical engineering to a bigger and better version dubbed the C-8, which it claims has the longest range of any electric boat in history.

Candela's C-7 poses an interesting solution to the limited range plaguing electric boats, which can't carry nearly as much energy to drag themselves across the water as those powered by high-density gasoline. Hydrofoils that lift much of the hull out of the water to reduce that drag can help address this problem, and the C-7 was a clever interpretation of this kind of functionality.

A pair of foils lift the boat up and out of the water to cut drag by up to 80 percent, enabling it to operate in virtual silence while reaching a top speed of 30 knots (35 mph, 56 km/h), all the while creating a tiny wake of just 5 cm (2 in). This affords the watercraft a range of 50 nautical miles (57 miles, 93 km) from its 40-kWh battery, which Candela says is around three times the range of what other electric boats on the market can offer.

The newly introduced C-8 pushes this range out beyond 50 nautical miles from a slightly larger 44-kWh battery pack, helped along by a new and improved version of the hydrofoiling technology and a newly developed drive train with a 55-kW motor at its heart. Candela says this gives it the longest range of any electric boat in history, though the under-development Sarvo 37, with a claimed range of 100 nautical miles, might have something to say about that when it hits the market.