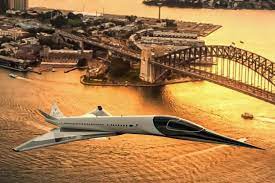 "If you are tired of long waiting hours due to the traditional flights, the wait is over now." So says self-proclaimed South African "tech mogul" Priven Reddy, founder of the latest company to throw its hat into the supersonic passenger aircraft space.

L.E.A.P. Aerospace is the name, an acronym that stands for "Limitless Earth Advancement Program," in the same way that New Atlas stands for "Neat Emerging World-Altering Technologies, Lasers And Stuff." And the company has gone live with some really cool renders of an upcoming delta-winged 65-88 seat supersonic airliner it says will get you from brekkie in New York to lunch in London in a 3-hour hop "at a twice greater speed, much greater than the speed of sound."